Do you use a dog seat belt? Driving around with your pooch is something that you either love or hate.  Some dogs love car rides as you’ll often see them excitedly sticking their heads out the window.  Ears flapping in the breeze, nose sniffing every molecule of air it can as the car “wooshes” onward.  But what if you were to get into an accident. Would your dog be protected by a dog seat belt safety harness? Or would you be charged? Do you know the law for a dog in a car?

There are several types of dog restraints that can be used in a vehicle.  Ironically, having your dog stick its head out the window is actually exceedingly dangerous for the dog.  Aside from the obvious dangers of the dog attempting to exit the vehicle through the window, there are other dangers as well.  These include but may not be limited to the dog being injured from being struck by other passing vehicles or by roadside objects that may be close to the vehicle.

The last danger which is predominant over the others is due to an accident.  What would happen to your dog if you were in a collision while the dog is sticking its head out the window?  Sadly, I think you can imagine what would happen.

The rules for traveling in a vehicle with a dog may vary between states, but in general, the following laws are applicable.  First, the RMS or Roads and Maritime Services, states a police officer can then fine a driver in the animal being transported inhibits the driver from the proper operation of the vehicle.  The penalties are a fine of $425 and 3 demerit points. The punishments might be more severe in different circumstances. For instance, being caught in a school zone, or in the case of an accident.

There are other ways that drivers can also find themselves in hot water with the law regarding transporting animals.  Should the worst happen and there be a motor vehicle accident, if the dog is ejected from the vehicle, or sustains an injury due to not being restrained, the driver might face further charges.  These would fall under the Prevention of Cruelty to Animals Act. If deemed guilty, an individual can face up to six months’ jail time and fines up to $5500. Likewise, carrying a dog in the back of a ute or utility vehicle for those of us not familiar with ‘Aussie lingo’, can land a driver a fine of $500.  This would be for lack of restraints to prevent the dog from being ejected in case of an accident.

Due to each territory or state having potentially different rules and regulations regarding the transport of dogs in vehicles, it is best to check with the local authorities in your area to be sure nothing has changed.  Here is a list of references for those seeking territory-specific knowledge on the subject of transporting dogs in Australia:

Some of the laws in Canada seem to be a bit vague when talking about the transport of animals. And if you want to find laws for a dog in a car specifically, good luck. There are two laws that apply in Ontario, for example, that sort of fit the bill but don’t actually mention the animals.

In Canada, like Australia, we also have laws that pertain to the cruelty of animals.  According to BCSPCA, the British Columbia Society for the Prevention of Cruelty to Animals, there are some pretty hefty fines if a person is found guilty of cruelty towards animals:

In Britain, the Highway Code takes a great approach and is quite specific about dogs.  The law for a dog in a car is not so black and white. I like that they also have a rule about walking a dog NEAR a road. Rule 56 and rule 57 of the Highway Code apply:

Dogs. Do not let a dog out on the road on its own. Keep it on a short lead when walking on the pavement, road or path shared with cyclists or horse riders.

When in a vehicle make sure dogs or other animals are suitably restrained so they cannot distract you while you are driving or injure you, or themselves if you stop quickly. A seat belt harness, pet carrier, dog cage or dog guard are ways of restraining animals in cars.” United Kingdom Government Website www.gov.uk/guidance/the-highway-code/

Although there is no actual offense for disobeying the Highway Code, there is a chargeable offense of careless driving which can land fines of up to £5,000 if your animal is deemed to be distracting.  Common sense says to restrain the animal while driving so you don’t get distracted while operating a motor vehicle.

Most states do not have laws specific to having a dog wear a harness or seat belt while in a vehicle.  There are a few exceptions though. Most states do have laws that state that a dog may not ride in the lap of the driver or in any way either distract or prevent the driver from properly and safely operating their vehicle.  There are a few states which have more specific laws though regarding dog seat belt harnesses and other similar restraints for vehicles and transporting dogs.

Dogs being transported in the back of a pickup truck must be restrained to prevent ejection from the vehicle.  If in a cage, crate or kennel, it must be secured.  This is the law for a dog in a car in Connecticut but it also applies to trucks, vans, and other vehicles as well.

Dogs being transported in the back of a pickup truck must be restrained to prevent ejection from the vehicle.  If in a cage, crate or kennel, it must be secured.

Dogs being transported in an open truck bed must be restrained to avoid ejection from the motor vehicle.  Also, unnecessarily cruel or inhumane manner of transporting an animal is also punishable by jail time or fine. Therefore, technically they have a law for a dog in a car, or rather about transporting a dog in a vehicle anyway.

Drivers can be charged a misdemeanor if caught transporting a dog in an open truck bed without restraint.

Transporting any animals without a suitable travel container like a crate or kennel is considered to be cruelty to animals and is punishable under state law.

All dogs must be suitably restrained for transportation purposes or a driver could face fines of up to $200.

Keep in mind that in most states, the police have the ability to charge you with some form of careless driving if you are caught with your dog riding in your lap as the driver.  This is just not a smart way to drive in the first place as your dog could move and prevent you from safely operating the vehicle. Not only that but in a collision, the dog could be thrown from the vehicle and no one wants that, especially the dog.  Be kind, buckle up.

Do you need a seat belt for a dog?

This is kind of like saying ‘Do I need to wear my seat belt in the car?”.  However, to answer this, I would like to ask you: Do you like being thrown through the windshield during a collision?  I’m pretty sure you’re going to say ‘No’ to that one. Well, then don’t be cheap and get a restraining harness for your dog.  This is not only for your dog’s safety, but it’s also to avoid a distracted or careless driving charge. What if your dog gets excited in the car while a police officer is beside you on the road.  If the police see the dog jumping around inside or on the front seat, you could get a nasty fine for careless driving. Just buckle up, okay?

What is the best dog seat belt for transporting dogs?

The best seatbelt for dogs is a comfortable restraining harness.  Make sure it is a certified crash-tested model though. There is some pretty cheap knock off products coming out of Asia that are downright wrong, so make sure you get a decent one.  Here are a few of my favorite Crash-Tested models:

Can you use a dog seat belt with a collar?

Certainly, this depends on the individual design of a dog seat belt.  Most are intended to be used as a harness so if your dog already has a collar, as long as the two do not interfere it should be alright.  Do not restrain your dog to your car via its collar. Use a harness. If there is a collision and your dog is restrained via a collar, it’s no different than if you were restrained by a collar.  There is a reason why seat belts don’t wrap around your neck. Think about it. Common sense should prevail here I would hope.

See above where I discussed the legal requirements for traveling with dogs in the United States of America. In other words, the law for a dog in a car while driving.  Make driving with dogs great again America! Drive safe!

Is it illegal to not have a dog seat belt?

Technically no, BUT… if you are driving and the dog is able to freely move around inside the vehicle it could be deemed distracting.  If deemed distracting, you can be fined with careless driving in most countries. In Canada, you can even be charged with distracted driving (thanks to cell phones, our police are on the lookout!). Some areas may deem that a dog moving around is breaking a law for a dog in a car by way of being distracted. Knowing the law is a smart move.

Can a dog sit on a passenger’s lap?

Technically yes.  Certainly, this is really stupid.  Here’s why it is a bad idea. If you are in an accident, no one can hold onto an animal through a bad collision.  The poor animal is going to get tossed around, maybe even getting killed. Or they will wind up hurting someone else by being thrown into someone.  Keep in mind that most vehicles have multiple airbags as well. If you are in the passenger front seat of a car, holding your dog in your lap and you get in a collision, what happens when the airbag goes off?

Airbags are designed to stop your head from exploding on the dash as your body is violently thrown forward. Or rather, as the car is violently stopped and your body is still traveling forward from momentum. The airbag has to basically punch you in the face.  Therefore, if you’re holding a dog in your lap, the dog is getting smashed into your face. Um, not cool? Don’t be dumb. In short, restrain your pet for its safety and yours using an approved, crash-tested dog seat belt. And learn your local laws to make sure you know the law for a dog in a car in your area.

More Great Dog Articles For You 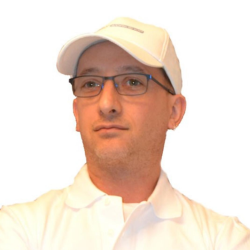 Jeremy Shantz
By day, Jeremy (aka Farmer Jer, Boater Jer, and Parilyz) runs Farm 6 Media, a web content services company. By night and weekend, Jeremy enjoys writing, gardening, boating, woodworking, philosophy, and producing EDM. Jer has a serious passion for plants and animals. He also has more than 30 years of experience in the care and husbandry of not only exotic plants, reptiles, and fish but also domesticated species like dogs and cats.